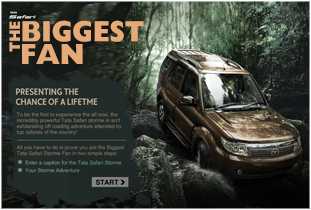 The Tata Safari Storme is in search of its ‘Biggest Fan’, through a contest on Facebook. Through the ‘Biggest Fan’ contest, 3 winners will receive an opportunity to experience the thrills of off-roading, in the new Safari Storme. The contest is open to participants from Dec 10 – 20, 2012. Participants can log on to the Biggest Fan app on the official Tata Safari Facebook page (www.facebook.com/tatasafari), and complete two simple steps – write a caption on the image of the new Safari Storme, and describe how they would like to embark on an adventurous journey, in the ‘Real SUV’. Participants can also share their entries on their own Facebook walls, to gather votes from friends. Powered by BrandAppZ.com.

Sorry, the comment form is closed at this time.